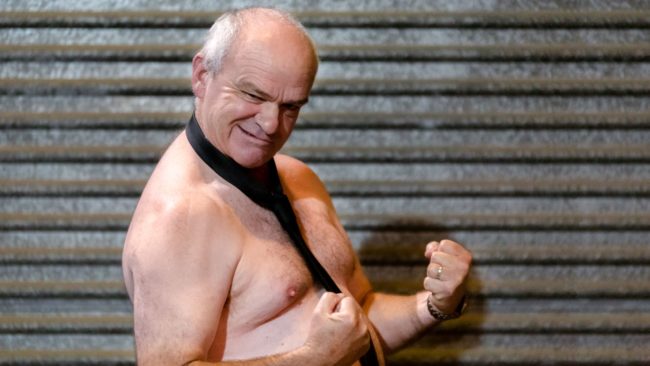 Morris West is one of the six leading men in the New Zealand community theatre premiere of The Full Monty. Every week he’s going to give us a behind the scenes peep at The Full Monty rehearsals, the cheeky shenanigans, and the naked photo shoots. This is week one of rehearsals and things are just kicking off.

Having now discovered that The Full Monty has nothing to do with the Monty Python that I thought I was auditioning for, it’s great to have week one in the theatre done and dusted, and what a week it was.

Taryn Raynes is throwing herself wildly into promotion, but more of her fetishes next time, because by the time you read this the glossies of the boys will already be out there.

Quite a few have used the time before we got into the theatre to get into their lines, so that’s great progress, keep it up. Unfortunately Alan, (ALAN!, ALAN!, ALAN!), only has his script down because he forgets to take it with him on stage.

So time for a few statistics.

Between Terry Darby, as oldest, and Flynn Wilson, as youngest, there are more than 56 years, or 20,710 days.

It’s great to see so many supporting those on stage during rehearsals too.

THE DETAILS: The Full Monty, a play by Simon Beaufoy and directed by John Lawson, is on at New Plymouth Little Theatre from July 14 to July 31. Early Bird tickets went on sale at noon on Wednesday April 21 at iticket.co.nz. They are $25 with the code “TAKEITOFF” 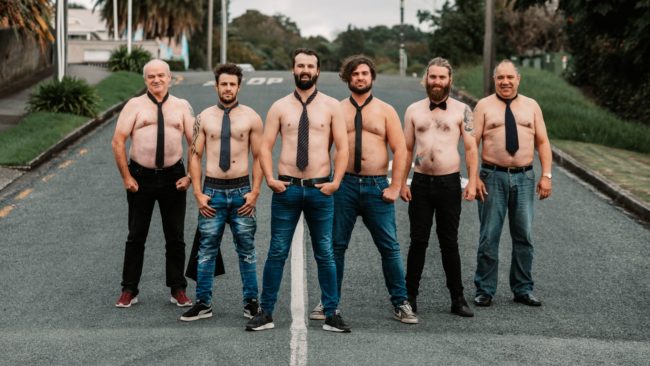 Stripping on stage and dancing around naked is about to be all in a night’s work for New Plymouth engineer Jimmy Bovaird.

The 29-year-old has landed the lead role in the New Zealand community theatre premiere of the hit play The Full Monty, which opens at Little Theatre in July.

“It’s a bit nerve wracking but I’m really excited to be a part of this,” Bovaird says.

“When I auditioned I didn’t think I’d get the lead role and have to get down to nothing, but I’m actually really looking forward to the stripping. That’s going to be the fun part.”

Bovaird, who has previously starred in The Rocky Horror Picture Show and Priscilla Queen of the Desert is playing Gaz, an unemployed steelworker from Sheffield.

His fiancé Jazz Gallagher suggested he audition for the award-winning show, which is based on the 1997 blockbuster movie.

Gallagher, who has also landed a role in The Full Monty, says she’s not worried about other women ogling her man.

“I’m really just showing off my fiancé,” she says, laughing.

The famous story follows six ordinary blokes as they have a crack at getting their gear off on stage. The six mates bare their bodies, and sometimes their hearts as they set out to make some cash and repair relationships.

Just like in the movie, Bovaird’s stripping troupe is made up of four younger blokes and two older men.

Rounding out the six strippers are seasoned entertainers Morris West and Howard Rozon.

Rozon is the former president of Operatic Society and was hunted out by Little Theatre to play the greatest dancer of the troupe, Horse.

“I jumped at the opportunity before I realised what I was actually in for,” Rozon says, laughing.

“I was hoping for maybe a small part, not actually showing my small parts.”

West, who has been in more than 80 plays across three different countries, is raring to go and even wore his favourite g-string to the first rehearsal.

“I wanted to give everyone a laugh and stir them up,” he says.

“That’s the great thing about theatre, you get to be someone else. And the adrenaline kick is pretty good too.”

Director John Lawson says he’s thrilled with the cast of 24 and his team is already hard at work.

“I was really impressed with the level of talent at auditions. We’ve got a great blend of seasoned actors, up and comers and there’s also a couple of newbies as well.

THE DETAILS: The Full Monty, a play by Simon Beaufoy and directed by John Lawson, is on at New Plymouth Little Theatre from July 14 to July 31. Early Bird tickets go on sale at noon on Wednesday April 21 from iticket.co.nz. They are $25 with the code “TAKEITOFF”

Words by Taryn Raynes and photography by Monique Matthews Photography 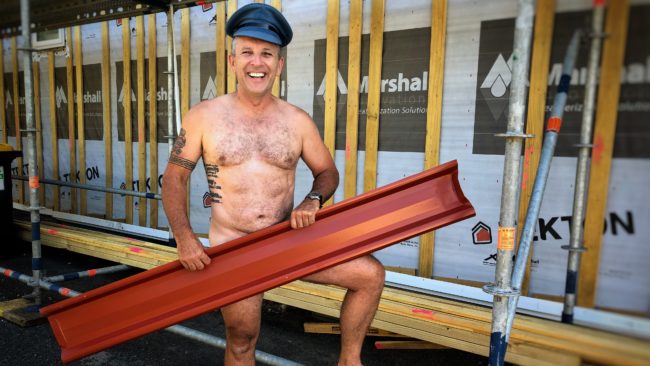 A Taranaki director is on the hunt for six ordinary blokes who are willing to get their gear off in the name of art and entertainment.

After years of trying, theatre director John Lawson has secured the rights for the amateur New Zealand premiere of the award-winning show The Full Monty.

Now he just needs to find the men who are keen to strip night after night to Tom Jones’ version of the iconic hit, You Can Leave Your Hat On.

Based on the smash hit film and adapted for the stage by Oscar-winning writer Simon Beaufoy, The Full Monty will open at New Plymouth Little Theatre in July.

Like the 1997 film, the stage show follows six unemployed steelworkers from Sheffield who form a male striptease group in the hope of making some cash and rebuilding relationships.

Lawson says he’s not looking for a troupe of chippendales or buff bodybuilders to play those six characters.

“These six men are normal, working blokes from a rather poor area. They’re ordinary guys, they could be anyone you know. We’ve just got to find them,” Lawson says.

In fact, Lawson says he is looking for the biggest cast Little Theatre has had in decades – 28 people.

“There’s only six people stripping, so not all 28 will be getting their gear off. We need 20 men and eight women, and some of the roles are non-speaking roles, so there really is something for everyone, even the people new to theatre.”

Lawson, who grew up in the UK and moved to New Zealand in 1979, remembers watching the film when it first came out.

“It’s always been one of my favourite movies. It’s got a great storyline, and I really enjoy that British sense of humour.

“I’ve pretty much wanted to do The Full Monty as a theatre show since the movie came out, and I looked into it about six or seven years ago. The amateur rights weren’t available yet, but they are now, and we’ve got them, and it’s going to be a lot of fun.”

Lawson says as well as being a rip-roaring comedy, the story touches on more serious issues – like unemployment, depression, and the rights of fathers.

“It’s not just a strip show. It’s a play based on a tough time in history, a time when unemployment was high and crime was high. So, yes it’s a play that centres around a strip show, but it’s more than that too. I hope everyone will come and see this.”

The Full Monty is on at New Plymouth Little Theatre from July 14 to July 31. Open auditions for all 28 roles will be held on Saturday March 13, 1pm, at Te Piere on the WITT Campus. For more information or for a copy of the script, please contact production manager Tasha Paton on tashapaton@gmail.com.

Words and photo by Taryn Raynes

Photo caption: Theatre director John Lawson is looking for six men who are willing to leave their hats, and only their hats on for The Full Monty.