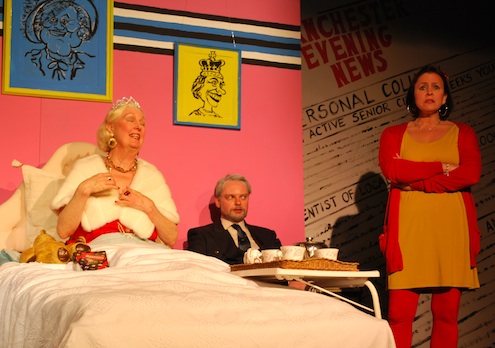 Christine King is directing our next play MR WONDERFUL. Here is what she had to say about it.

I’m so looking forward to directing Mr Wonderful again as I think it is such a wonderful play! Over 12 years ago, when I directed it at Cue Theatre in Inglewood, it was a huge success and it has been said that a couple who are regular theatre goers in Taranaki, said it was their favourite play they had seen. Written by James Robson, it is both humorous and touching which appeals to the general public.
Set in the 90’s it is about Norma who works part-time in a greeting card factory and looks after her bedridden mother, Phoebe – a real character -(or is that two characters..?) while longing for a relationship with a man, – not just any man – but the right man – Mr Wonderful. Does Mr Wonderful exist though? At her mother’s instigation, she begins replying to dating agency advertisements in the local newspaper with both frustrating and humorous results. But does she find her Mr Wonderful, as has her mother, who never leaves her side… Included in this witty play, we meet a couple of the ‘dates’ she goes on which can be described as hilarious. Opening on Wednesday August 30 through to September 9th with a Sunday matinee, it is sure to sell quickly so when bookings open, book your seat to ensure you won’t miss out?