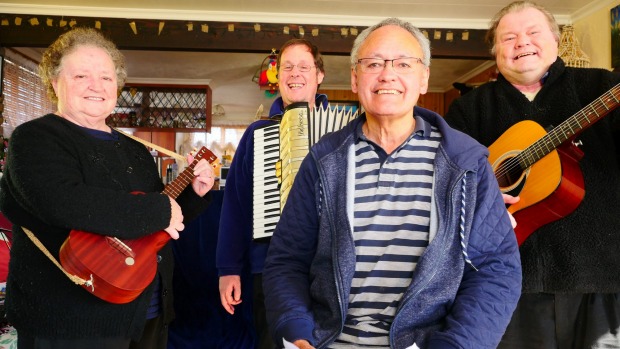 He might not play an instrument, but he could travel to Brazil to perform a song for New Zealand Olympians.

Ted Normanton’s love of hockey and passion for words has him recording a tribute song to the women’s Black Sticks Olympic team.

“I’ve been in contact with a producer from The Crowd Goes Wild and if they like my song, they’re going to fly us out to the games,” Normanton said.

The 2016 Rio Olympic Games begin on August 5 and Normanton and his three musicians, Niall Corbett, Coral Adlam and Peter Galvin, are preparing for a stellar performance of the song, titled Tribute to the Women’s Black Sticks Olympic Team.

The poet and former teacher is the team’s number one fan and has spent three months crafting the six-verse tune.

“It was originally nine verses. We had to cut it down because it was too wordy,” Normanton said.

“The song is sung to the tune of Vive L’Amour because it’s got a real bouncy, catchy rhythm. The words lend themselves to the tempo.”

Normanton dedicated a melody to the hockey team about nine months ago, titled Ode to the Black Sticks, and said because it was so well received, he was inspired to write another piece.

In order to impress the players, Normanton reached out to guitarist Corbett and piano accordion player Galvin.

“I’ve known them since they were boys and I asked them to help.”

“I wanted a women’s voice and Niall suggested Coral to join,” Normanton said.

“I’m very fortunate to have their services.”

It continues, “Come all you Kiwis, let’s give our support. Vive our Black Sticks team and may they realise Olympic dreams. Vive Olympic fame.”

The band recorded the song at the TET Cue Theatre in Inglewood on Thursday so they could distribute CDs to the players.

“They’re going to love this. I just know it.”