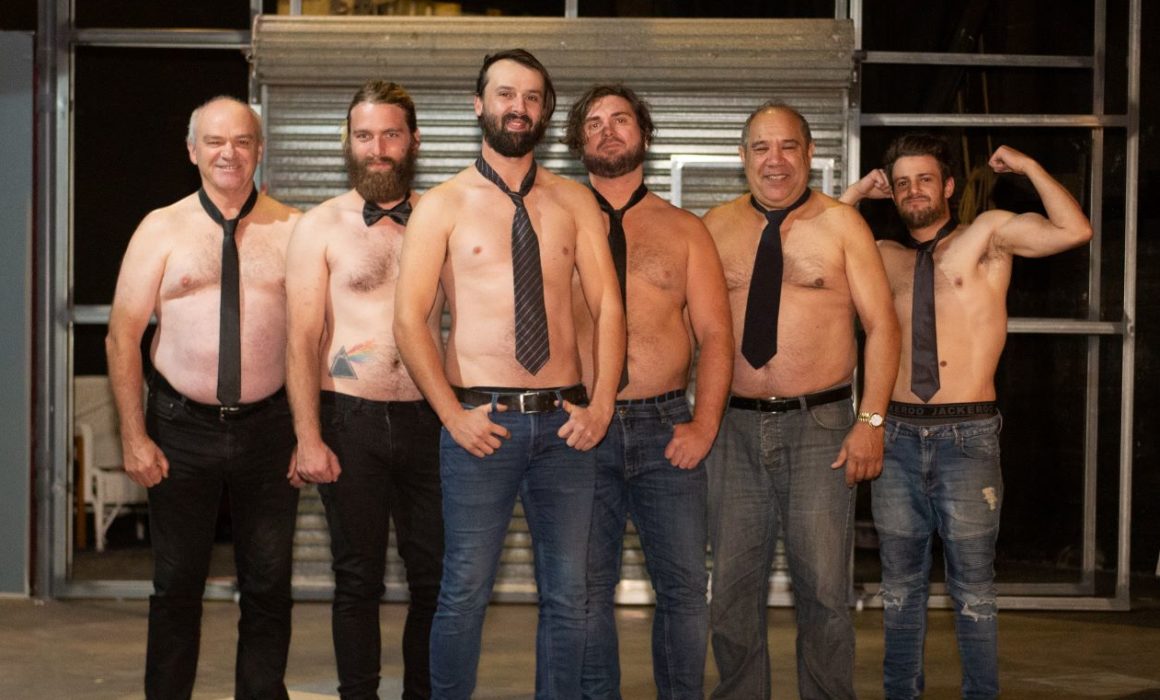 Morris West is one of the six leading men in the New Zealand community theatre premiere of The Full Monty. Every week he’s going to give us a behind the scenes peep at The Full Monty rehearsals, the cheeky shenanigans, and the naked photo shoots. This is week three of rehearsals and Morris has been enjoying some time at the spa, and with his gnomes.

This week I discovered the importance of actually reading messages and not just having a ‘man-look’.

Production manager Tash Paton sent out the info for the big photo shoot. This was sent midweek and when I read it I saw Sunday at 2pm and read no further.

A spray tan was booked and carried out by Zen Day Spa, (who tried to find out if we are going “Full Monty”, and no I didn’t tell them)

I sent out the photo to a few who might like to know, only to be asked, “Great, but will that last until the 16th, when the photo shoot is scheduled?” Still it looked great for Marisa, the Emcee for the Toscars.

Congratulations to John “ALAN, ALAN” Lawson for his victories, ahead of stern opposition, (for stern read none), and to others in the cast who picked up awards. Also well done to Jor-El Shaman, Charlie Couchman and me for their entertainment items on the Toscars.

As of mid-week, with that final, lone ticket selling, we officially became a bunch of sell-outs.

Gillian Gibbon, aka Linda Luv, discovered the danger of listening to advice from men, who told her, “You can throw that gnome, it’s solid resin and won’t break.” We have since discovered they are not solid and do indeed break, resulting in garden gnome Happy Pete becoming pirate Lucky Pete, or Not-so-lucky Pete, with one eye, a hook hand and a wooden leg.

Finally, I can settle an age-old myth: I have now been dark skinned for four days and my willy hasn’t got any longer.

THE DETAILS: The Full Monty, a play by Simon Beaufoy and directed by John Lawson, is on at New Plymouth Little Theatre from July 14 to July 31. Thirteen shows have sold out, so we’ve added a Girls’ Night out and a Monty Matinee. Tickets go on sale on Wednesday May 5 at noon, at iticket.co.nz. They are $30.